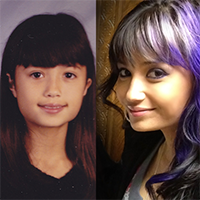 Novella Genelza is a writer, artist, graphic designer and poet from the San Francisco Bay Area. She has a bachelor’s degree in creative writing with a concentration in poetry from University of California Santa Cruz. During her time at UC Santa Cruz, she guided freshman writing students as a teacher’s assistant and worked for the school’s literary magazine, Chinquapin, helping with magazine layout, design and written contributions. She also did journalistic writing for BSN (Banana Slug News), the school’s own student-run television station.

An avid reader and writer since her early childhood, Novella has always loved creating books. She began writing stories at the age of five, and wrote and illustrated the children’s picture book, The Dragon Carousel, when she was eleven years old. Since writing and illustrating The Dragon Carousel, she has illustrated many other picture books, including Chirpy the Chipmunk, Red’s Adventures, The Vegetarian Cat, and Leo and Lola. She has also done cover artwork for numerous anthologies, novels, and workbooks, including A Journey in Time and Poems from the Playground. Novella prefers to create her artwork digitally, but uses a variety of mediums based on the wishes of the authors that she works with, including colored pencils, watercolors, markers and mixed media.

Novella’s poems have been published in various literary magazines and anthologies, including Dream, Xpolited Zine, Chinquapin, and Flatmancrooked. Her poems are usually written in free verse and often mistaken for prose. She has also experimented extensively with the serial poem format. The topics of her work vary, but are usually dark and realistic in nature. Her work has been influenced by some of her favorite poets, which include Ai, Jack Gilbert and Henri Cole.

Novella has also dabbled in the field of journalism. As a longtime music enthusiast, she has enjoyed interviewing musical performers and writing articles about the music industry. Her music-related articles have been published in Xplosive Magazine as well as various sites and blogs. Her passion for the aftermarket automotive industry led her to write various auto-related articles, which can be found on auto industry websites, including Hot Import Nights.

In addition to her passion for writing and visual art, Novella has always enjoyed teaching, tutoring and conducting recreational activities and has over ten years of experience working with children. Her love for working with children brought her to work at Lekha Publishers LLC., and Lekha School of Creative Writing, where she teaches the art of creative writing to children and manages the publishing house. Novella enjoys editing, formatting, illustrating and doing graphic design at Lekha, but most of all, she enjoys touching the lives of the young authors that she works with. She hopes that her success as a writer and illustrator will inspire her students and any other children and youth who aspire to become professional authors or illustrators.

Author and Illustrator:
The Dragon Carousel